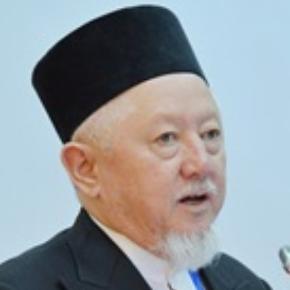 Absattar Baghysbaiuly Derbisali  is the Supreme Mufti of Kazakhstan. He served as mufti from June 24, 2000 to February 18, 2013.
In February 2013, Derbissali resigned to continue his activity in science and education.
On February 26, 2013 Derbissali was appointed Director of Suleimenov Oriental Studies Institute.
Derbissali is a member of the Academy of Science of Kazakhstan. He is a Doctor of Philology, a professor, an orientalist and a diplomat. He holds a diplomatic rank of the first class adviser.
Derbissali is the author of 400 theoretical articles and practical developments in the Arab language and literature, ancient periods of Kazakh literature and culture, Kazakhstan's spiritual connections with the Muslim countries of Middle East, as well as the history of Islam, Quran and the sayings of the Prophet Mohammad.