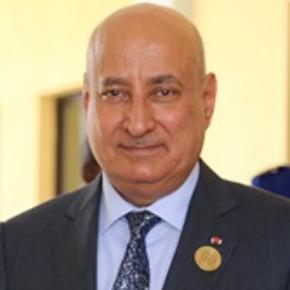 BA in English Language and History in 1974 from King Saud University in Riyadh.
In 1977, he received his master's degree from the University of Oregon, USA, and in 1982 he received his doctorate in curriculum from the same university.
Al-Tuwaijri worked as an assistant professor at the College of Education at King Saud University from 1982 until 1985, and supervised the center of authoring, translation and publishing at that university.
From 1985 to 1991, he was Assistant Director-General of the Islamic Educational, Scientific and Cultural Organization (ISESCO). He was unanimously elected Director-General of ISESCO in 1991 and continues to this position to this day.
Since joining ISESCO in 1985, Abdul Aziz Al-Tuwaijri has been interested in joint Islamic educational and cultural work on the one hand and cultural and educational communication with foreign countries on the other.
He was the Director General of ISESCO between 2009-2019.