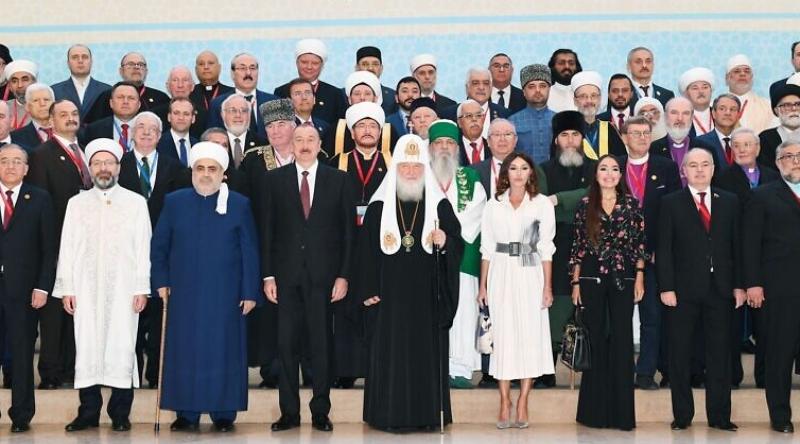 AZERBAIJAN—At the opening of the second Baku Summit of World Religious Leaders on Thursday, more than 400 delegates from 70-plus countries gathered in Azerbaijan for two days of discussion on the importance of intercivilization and interfaith cooperation, as well as the role of religious figures to promote joint dialogue and solidarity against terrorism, extremism and xenophobia.

This represents the second such summit; the first of its kind took place in 2010.

In his opening remarks Azerbaijan President Ilham Aliyev highlighted the role of his nation in the establishment of an international model of global multiculturalism and the promotion of human solidarity. “Azerbaijan has a centuries-old tradition of dialogue between traditions and religion, with all ethnic minorities living in peaceful conditions of mutual understanding and compassion in a multi-national country,” he said.

“National and religious tolerance are the core values for all of us,” continued Aliyev, who expressed concern in “clashes, confrontations, war, shedding blood of brothers and committing crimes [in the name of] religion,” saying “we must unite our efforts in this area.”

Sheikh ul-Islam Allahshukur Pashazade, who celebrated his 70th birthday, his 40th anniversary as chairman of the Caucasus Muslim Board and in whose honor the summit took place, spoke of building state-religion relations, the development of intercultural and interreligious cooperation, and the preservation of peace and promoting ideas of multiculturalism. “Multiculturalism is our lifestyle, and our idea of national and religious unity at the state policy level,” he said. “Our main goal is to unite the efforts of political, social and religious leaders aiming to combat threats to international stability like Islam-phobia, Christian-phobia and anti-Semitism, [as well as] strengthen dialogue.”

He maintained that “electronic communications, social networks and mass media have created grounds to turn hatred to a widespread system around the world” with “hate speech provoking instability around, incites war crimes and genocide.” He referred to the proliferation of hate speech as a public danger, asserting that “this conference can have an exceptional value for the international community.”

Invited by the Caucasus Muslims Office and representing Judaism, Islam, Christianity, Buddhism, Hinduism, Zoroastrianism and their many denominations, various leaders acknowledged Aliyev and Pashazade’s approach to religious acceptance and multiculturalism, praising the opportunity for solidarity and calling for end to religious hate and persecution.

Malcolm Hoenlein, executive vice chairman of the Conference of Presidents of Major American Jewish Organizations, related the importance of “emphasizing what unites rather than what divides us,” saying “religion should be a unifier, not a divider.”

Summit participant Rev. Johnnie Moore similarly expressed to JNS his gratitude that “Azerbaijan is a nation that gives us hope that the world can be a better place, a place where religion is a blessing to the world and not a curse—where religion is used to unite and not to divide.”

He continued, “This is a country where Sunni and Shia Muslims pray together, where Orthodox and evangelical Christians serve together, and where the Jewish community is not only valued but plays an indispensable role in the society.”

Rabbi Dr. Elie Abadie of New York, in his Friday-afternoon plenary address, maintained that he, among other summit participants, attended the conference to echo the importance that Azerbaijan places on multiculturalism and dialogue. “All of us here—Jews, Christians, Muslims, Buddhists, Hindus and others—are gathered here to affect change. By planting the seeds of true peace amongst ourselves and our co-religionists, we can come to a reconciliation of our people,” he said.

Abadie, representing the American Sephardi Federation, told JNS his that personal goals in attending the Nov. 14 summit were “to establish bridges of communication, common ground and basic beliefs that we can all agree.”

“Having been born and lived in Lebanon, where Jews, Christians and Muslims commingled together,” he explained, “I’m able to break barriers and have an understanding of coexistence that can be developed.”

Abraham Cooper, representing the Simon Wiesenthal Center, maintained that while the rest of the world has seen an increase of anti-Semitism “on both sides of the Atlantic,” “Azerbaijan is a beacon of hope, a living embodiment and reminder of how tolerance and mutual respect by all followers of the Abrahamic faiths can succeed when they actually care for each other.”

“Rabbis in France, Germany and Scandinavia urge their co-religionists not to wear a kipah or a star of David in public, religious Jews are targeted for violence on the streets of New York City, every Jewish institution needs armed guards, and the Internet and social media inspire violence,” he said.

In this context, Cooper told JNS that “the conference was a unique opportunity to interface with religious leaders from Saudi Arabia, the Gulf nations, and Muslim and Christian leaders from Asia and Africa,” and noted the significance that “Rabbi Amar, the Sephardic Chief Emeritus of Israel, was seated at opening session next to the representative from Kuwait.”

Cooper presented the sheikh a shofar (ram’s horn) from Jerusalem to serve to “awaken us from apathy, give us courage in times of conflict and to signal our unshakeable hope in a brighter future for the Jewish people and all humankind.”