Visiting the ‘Mountain Jews’ of Azerbaijan, one of the world’s last remaining shtetls 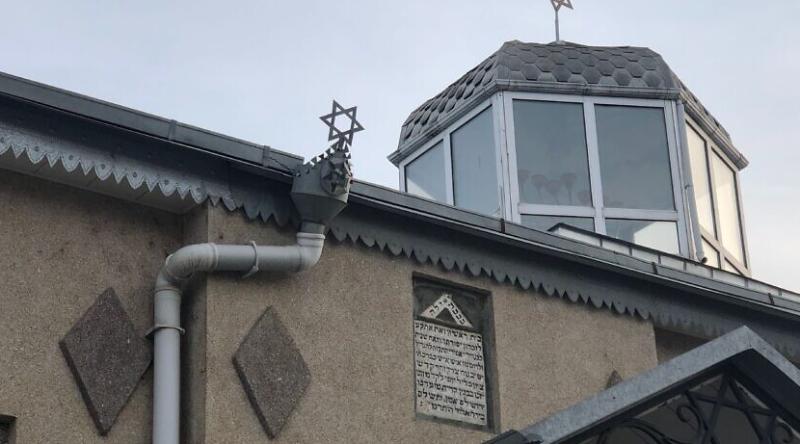 AZERBAIJAN—Affectionately called “Mountain Jews,” the Jewish community of Qırmızı Qəsəbə (Red Village) in the Quba district of Azerbaijan is home to nearly half the Jews living in this Muslim-majority country. Believed to be the world’s only all-Jewish village outside of Israel and the United States—and the last surviving shtetl—the Red Village is situated in the northeast of the country, close to the border with Russia.

It is also historically one of the few places in the world unaffected by anti-Semitism. According to the Jews of the Republic of Azerbaijan, the country is an “oasis of tolerance,” protecting all religious minorities (Jews included) in a world where persecution has become a norm.

A visit to the “Six Dome Synagogue” (“The Grand Synagogue,” designed by architect Hillel Ben Haim in 1888), one of three synagogues in Quba, illustrated such freedom. Invited by the Caucasus Muslims Office and ahead of the second World Religious Leaders’ Summit in Baku this week, a group of Jewish leaders visited the Red Village and Six Dome Synagogue.

Unlike synagogues throughout Europe, the United States and Muslim-majority countries in the Islamic world, there are is no need for armed guards or high-tech security measures. Unlike many synagogues where, before entering, guests are asked a barrage of questions to verify their Jewish identity, the only request at Six Dome is that guests remove their shoes before entering. With no women’s section (women do not usually attend services at the synagogue outside of the Jewish holidays, explained a worshipper at the synagogue), the women entering were simply asked to cover their heads, whether married or unmarried, and prayed with the congregation.

Approximately 25 men were present at last week’s Wednesday afternoon and evening services, with at least 10 boys lining up following the prayer services to be blessed by visiting Rabbi Yitshak Ehrenberg of the Central Orthodox Synagogue of Berlin.

“If we see children here, it’s a sign of the future,” Ehrenberg told worshippers in Hebrew. “Follow in the steps of Abraham,” he said. “Follow his tradition to be Hebrew.”

It seems that’s exactly what the Mountain Jews are doing. “For a Jew in Azerbaijan, spending Shabbat in the Red Village is like returning to your most essential home … for over two thousand years, Azerbaijan has been the kind of homeland that most Jews have always hoped for,” wrote leader of the Mountain Jewish Community Milikh Yevdayev in the Jewish Journal. “Historically, Jews that settled here in Azerbaijan have been far better off than those that were eventually able to return to Israel; those that were massacred by Romans, pushed in and out of Spain, to eventually suffer Hitler’s atrocities in Europe in the 1930’s and 40’s,” he added.

‘A nation of tolerance’

The history of Jewish settlement in the Red Village, named for the red tiling used on many of the roofs, is believed to date back at least 2,600 years, though many claim that it dates back 2,800 years—150 years before the destruction of Jerusalem and the First Temple by Nebuchadnezzar, the Babylonian king, in 586 BCE.

Following this wave of Jewish settlement, others came with the Persian Empire, and throughout the Mongolian and Islamic conquest of the region. The Red Village was officially established in 1742 when the Azerbaijani Muslim leader of Quba gave permission for the Jewish community to establish its own town there without fear of persecution. Today, approximately 8,000 Jews live in Quba. The community is comprised of Mountain Jews, as well as Georgian Jews who arrived in the early 20th century, and Ashkenazi Jews who arrived in the late 19th century and during the Second World War.

All of Azerbaijan is home to 30,000 Jews in eight Jewish communities with seven synagogues. Outside of the Red Village, Jews have largely settled in the eastern city of Baku, the nearby city of Sumgayit and the Oguz district in the north.

According to Yevdayev, in the context of a region with extremist violence and the rise of anti-Semitism around the globe, the unusual story of Jews in Azerbaijan is a rare blessing that becomes, in this context, that much more important.

Azerbaijan’s history of intercultural and interreligious dialogue dates back centuries, including its early exchange with the Jewish Kingdom of the Khazars in the north, from the eighth to 13th century. The country is known to be an island of religious multiculturalism and interreligious dialogue, with radial Shia Islam on its southern border with Iran and radical Sunni Islam on its western border with Turkey.

This has resulted in flourishing Jewish life in the Red Village and beyond.

“We are a nation of tolerance, living in peace and dignity with all in our area,” said Mubariz Gurbanli, chairman to the State Committee on Religious Associations of the Republic of Azerbaijan, at a meeting with the Jewish delegation in Azerbaijan on Nov. 13.

“There are no religious conflicts in Azerbaijan, and it is a priority of the state to promote tolerance,” he said. “Here, people refer to people’s humanity not their religion, so Jews can wear a kipah in the street, and nobody will ask or bother them. Azerbaijani Jews say that other than Israel, Baku is their second home where they feel safe and free.”